I finally went to a doctor who seems pretty confident about what I have.  He had me do a Cunningham Panel, which is a blood test.  I got the results back couple of weeks ago and it seems like I have a component of PANDAS/PANS, a nervous system disorder.  Luckily, this doctor has had similar cases and has a treatment.  I am currently in process of completing a ten day cleanse where I can only eat fish, fruits, and vegetables for the bulk of it(and drink a nasty powder supplement).  While I am doing the cleanse I also started taking a boatload of supplements.  I will be taking these supplements plus an antibiotic I have been taking for a little bit now.  Hopefully this treatment will be the one to end all of this.

So far the Mayo Clinic has been a nice experience.  It’s nice to be in a place where I might be able to get some answers with whatever it is going on with me.  I’ll be going to the “Spells Clinic,” where they have had cases like mine, which is comforting that I’m not the only one.

After going to the spells clinic and then an allergist, we were still left in the dark about what I might have.  Unfortunately we will have to leave empty handed and head back home.  On a side note, the architecture is impressive and each building has it’s own style.  Though I did not get any answers, I’m glad that this place is here to help other people with hard cases.

Starting this new semester will be interesting. I’ve never taken online classes before, but I think I’ll like them. I’m non traditional to begin with, so having the freedom to do my classes anytime, anywhere is a good idea to me. Thankfully my seizures, or whatever they are, are slowing down. I’ve only had a few small ones here and there. It’s nice to finally have some freedom. Anyways, I figured the best way to start the semester was with a new coffee. 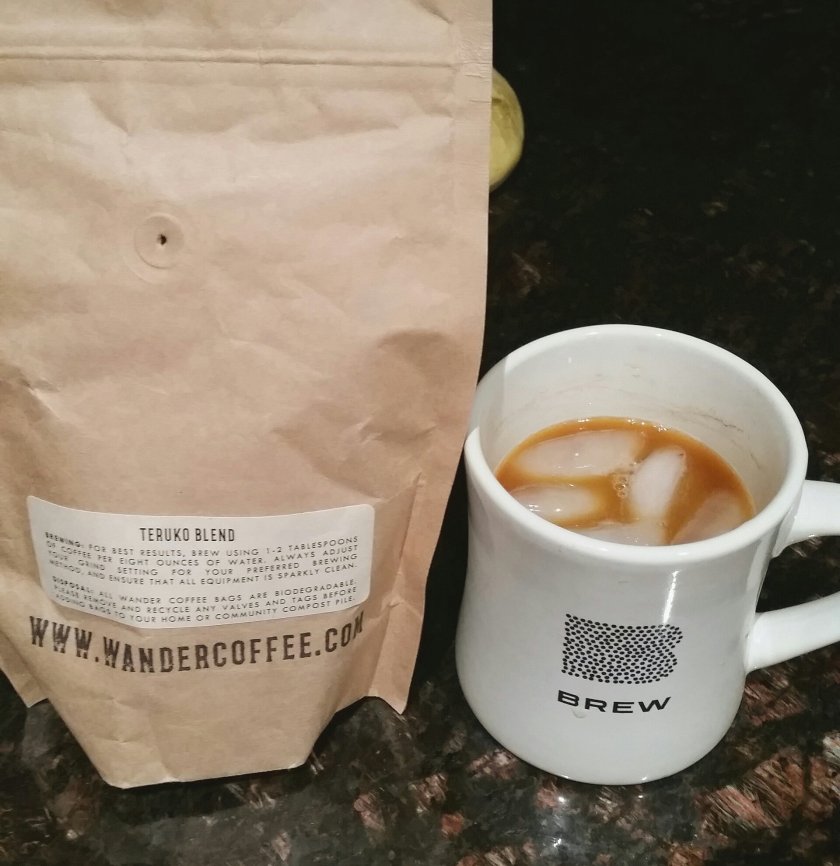 This coffee hails from Fort Collins, Colorado. The Wander Coffee Teruko blend is a nice medium blend. It has a smokey undertone and is pretty rich out of a Chemex. The grinds by themselves would probably be good as a rub for some beef, I know that sounds weird for a coffee.

I won’t change the name of the blog, but I got results back from the five day EEG that show I may not have Epilepsy.  During the episodes and seizures I had while the mass of bandages was on my head, my brain waves were normal.  At least my brain is normal, I don’t have to worry about something in there anymore.  The neurologist said the best results came from the 24/7 video recording.  Every time I had a seizure, he saw the way my body contracted on the right side was unusual for Epileptic seizures.  At this point he is trying to figure out what I have.  I could have a movement disorder or a vascular problem.  The vascular problem could be an answer, as my arm get’s cold and numb, like there is a slowing of blood going to my fingers.  I have a test coming up to look at blood flow, like an MRI for my veins.  Hopefully when I get that done, we will get some good results out of it.

After five days of annoyance, I’m finally allowed to go out of my house.  I had more than 25 electrodes on my head and two on my shoulders.  sleeping was a nightmare, the cables coming out of the back of my head pulled my neck while I was asleep.  I had some seizure during the five days and one episode that lasted around ten minutes.  so hopefully that will lead to some positive results.  The company takes about a week to process the results of the test and the “detailed” notes I had to take every time I did something, like eating or laying around.  Next week will be interesting when we get the results back at the neurologist appointment.

Today is the first day of my five day seizure monitoring.  I have a ton of leads on my head and they are all wrapped in medical tape.  I also have a camera bag that holds the receiver for the leads.  I can’t take showers or scratch my head.  There is also a taped up mass of wires running off my head and down my back.  It’s really heavy and uncomfortable.  Based off of my description, I hate this.

It came out of nowhere from a blank stare.  The seizure gripped me.  Once it release me, I was in a dream state.  I couldn’t see or move.  Every minute or two, I would have another short seizure.  When the seizures ceased, I drifted deeper into the dream.  Reality and time slipped away.  I was beneath shallow, dark water.  My parents tried waking me up, but all I could hear was faint voices.  They moved my body and tried to irritate me out of the dream.  All I could feel was a floating feeling beneath that water.  As time passed the dream turned into a nightmare of darkness.  Nothing my parents could do, would work to wake me up.  Now and then, I would talk in a half awake state, they took this opportunity to give me a pill that my neurologist said would make me sleep, but stop the seizures.  This seemed like 45 minutes into the nightmare.  The medicine set in and I was gripped by paralysis.  The water in my nightmare was getting deeper.  I was trying to swim to the top, but I couldn’t move my arms.  It felt like my breathing was slowing and the life in my body was ceasing.  Then a hand reached down to pull me out of the water.  Just as I was getting to the top, I broke out of the dream, into reality for a few seconds.  to me I was trying to wake up, to my parents, it seemed like I was having a full body seizure.  One and half hours into the nightmare.  My grip on the hand slipped and I fell back into the water.  They tried even harder to wake me, but nothing worked again.  My breathing slowed to a few breaths.  Before I knew it, I was floating into the E.R.  My parents had put me into the car and rushed me to the hospital.  I was floating down the hall to my E.R. room.  The nightmare got worse every time a doctor or nurse tried to wake me.  They tried sternal rubs, but that sent me into a spiral of seizures in my nightmare.  Two hours in now.  Once again, I was sleeping under that dark water.  A hand reached down once again.  This time the hand was clothed in light and gripped my hand with a firmness, that I haven’t felt before.  The hand pulled me straight out of the water and up to reality.  It felt like a gust of wind was on my face as I woke up.  I was shocked, as one would be after a two and a half hour nightmare.  I was finally awake, The E.R. room confused me at first.  I remembered where I was now, back at the hospital.  I had a similar episode a few days before this episode.  Eventually,after a CAT scan, they got me back up on my feet and I left the E.R.  The nightmare behind me now. I was awake again, I was myself, and I was alive.  No matter what this affliction throws at me, I will always rise above the challenges it presents to me.  Eventually this will come to an end and I will be able to move on with my life and carry this experience as a new way to overcome trials.

Other blogs that are worth checking out.

Donald on Dining in and Out.

Coffee at its Best

Everything about Books and Reading

getting through the slump

The Bored Epileptic
Powered by WordPress.com.